I’ve been putting off writing this post, partly because I wanted all the pies to myself. But now that I’ve overdosed on pastry, I’m willing to share the secret of the St George’s Mall Thursday Lunch Market with the rest of the world (or at least with all 12 people who read this blog).

It’s actually called the ‘Earth Fair Market’ but that sounds rather weedy and do-goody and ever so slightly hippie/hipster. Also, there’s nothing particularly earthy about chocolate cupcakes with Lindt balls inside them, tacos, falafel, biltong, fudge, cheese, springbok cottage pie, and lots of pies in general. I think it would be much better if it were called ‘The Diet-Doom Market’.

I’m not sure which is less appropriate: the tartan pants or the name of this food market

But anyway, let’s not quibble. Let’s rather focus on what you’ll be buying for lunch tomorrow. Yes, I grandly extend an invitation to every one of you to join me for a good guzzle at 1pm at St Georges Mall every Thursday. If you’re a first-timer and a meat-eater, I’d suggest you head straight for the pie stand pictured below. You will recognise it by the fact that it is covered in pies (although there are a couple of quiches looking lost). Make sure your pie is properly warmed. A luke-warm steak pie with cold patches inside is strangely reminiscent of eating a dissected cadaver. Not that I’d know, of course.

Lots of pies. Some of these have now taken up residence on my bottom.

At this point, I feel I should give credit to my Newshound Friend for introducing me to both the market and the pie stand. I bumped into him on the day of the Adderley Street Riot and he told me about the market. (His excuse for being at the riot was that he had to go to the post office and works nearby, but I know better. My Newshound Friend is a fire- and riot-chaser. I have known this ever since university, when the two of us raced to watch Kingswood College burn down.)

Portrait of a Newshound with Samp and Beans

If you come to the food market, I must warn you that you may be unlucky enough to bump into people you know. Below is a photograph of my colleague looking embarrassed to be seen by me. She has been going to the food market every week for months and never told any of us in the office about it.

It is considered Bad Form to discover good food markets and not tell people about them.

A couple of tips in closing: 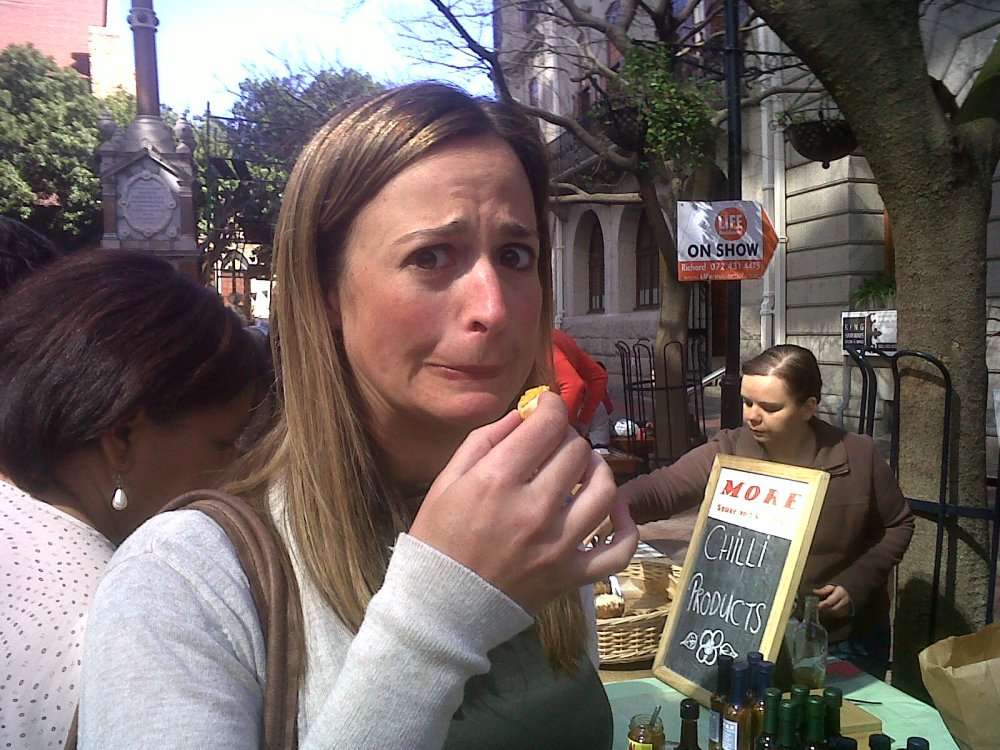 Your chin will grow back eventually, but it’s a rather nasty side-effect all the same.