Today I spent my lunch break doing squats with a magnifying glass in the basement of the oldest synagogue in South Africa.

Although I have sometimes been complimented on my Jewish looks, I have no Hebrew heritage and (I’m ashamed to admit) not all that much interest in Zionist history. But two things lured me into the museum today:

1. The museum was having an open day, so I could get in for free. I have lots of Scottish heritage, so this appealed to me.

2. I have always been intrigued by the enormous poster of the strange animal with a very long neck (it’s not a giraffe) that’s on the side of the building. Apparently, it’s one of the Hidden Treasures of Japanese Art that are part of the permanent collection of the Museum.

After completing rigorous security checks, including a sweet but sharp-eyed Jewish Granny interrogating me gleefully at the entrance about my intentions, I walked past a very large pair of wings and swiftly, if somewhat apologetically, past all the other exhibits into the small room where the Treasures are Hidden. 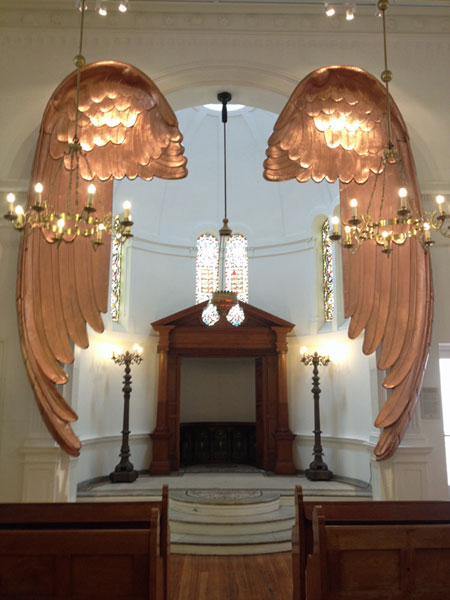 The Hidden Treasures turned out to be something called Netsuke. Netsuke are simply toggles that Japanese people used to prevent their pockets falling off their kimono belts. At some point, they went from being bits of shell and driftwood to some of the most intricate jewelry ever devised.

Netsuke vary from comical, to ludicrous to something approaching divine. The Jewish Granny had led me to believe that taking photographs would send the Ark of the Covenant crashing down upon my head (in the nicest possible way), but I can share the official descriptions of some of my favourites with you.

62. Netsuke of a mermaid and an octopus making amorous advances to each other.

69. Netsuke of a father and son startled as a tea-kettle comes to life as a badger.

70. Netsuke of the witch-dragon Kiyohime gripping her hair with her three-clawed hand, laughing wickedly as she entwines her reptilian body around the bell of the Dojoji temple; inside the bell is her captured monk-lover Anchin, who has spurned her, his face peering through an opening.

I managed to find a pic of this guy on their website:

9. Netsuke of Shoki the Demon-Queller standing on one leg, his sword in his right hand, holding the rim of his hat, on top of which hides an oni (or demon).

All of this detail is exquisitely captured in objects smaller than a Kinder Egg. Each of them is bursting with so much personality and vitality that I’m convinced they come to life every night as soon as the museum closes.

As for the strange animal with the long neck, it turned out to be a netsuke of a doe howling at the moon (as does do). Next time I pass the Jewish Museum on a night when the moon is full, I’m going to listen out for her.

39. Netsuke of a seated deer howling at the moon. Pic stolen from Jewish Museum website, because I’m scared of Jewish Grannies.